Results of Last Month’s Poll about the 2011 Block Lotto

Posted by Automagically imported from Blogspot on November 20, 2010 in blocks | 6 comments

I asked what kind of lotto blocks we should make in 2011.  58 people voted–thank you–and here’s the result. 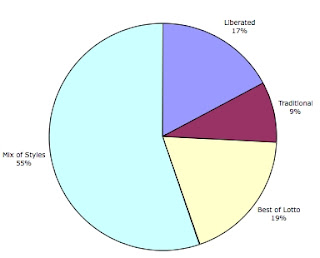 More than half wanted a mix of styles and techniques, but every category had some significant followers.

For those of you who voted “best of lotto”  . . . please leave a comment and tell me which lotto blocks you’d like to see repeated and if you’d like to give them a new twist (different colors, different size, or different in some other way), let us know.   With a little effort, I can figure out which are the blocks with the highest numbers . . . but I’m thinking those aren’t necessarily the same ones that some people would like another chances to win.

Actually, no matter HOW you voted or even if you DIDN’T vote in the poll, if you have a block you think I should consider for next near, or a colorway that we’ve skipped (or that you’d like to repeat) feel free to leave a comment and tell me about it.