Posted by Automagically imported from Blogspot on October 22, 2011 in blocks | Comments Off on 4 more sampler blocks 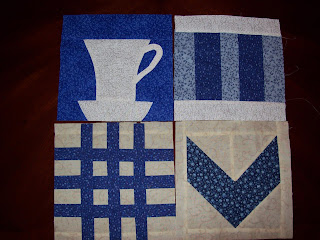 These are my final 4 blocks for the October blue and cream sampler. The cup is the mirror of the cup in my first batch. The other 3 blocks are taken from patterns in Debra Henninger’s book, Hobo Quilts, 55+ Original Blocks based on the Secret Language of Riding the Rails. She adapted the chalk marks and other signs used by hobos in the 30s to mark locations for their fellow vagrants. I chose blocks for their ease (no applique!), and working with these colors. The top right is her “Anything Goes” block, the bottom left is the “Jail” block, and the bottom right is the “fake illness” block. Her patterns are for 6 1/2″ blocks, so I had to do some math to adapt them to the 8.5 “. She has interesting quotations from the vagrants, as well as photos from the era, and photos of several quilts composed of the different blocks. I actually bought this through my paperback book club instead of in a quilt shop, although Amazon probably has it; just came out last year. the blocks would be interesting made up in work shirt fabric or denims, ginghams, or the homespun plaids.
Social media & sharing icons powered by UltimatelySocial