Posted by Automagically imported from Blogspot on June 3, 2011 in block lotto community | Comments Off on Red & White top 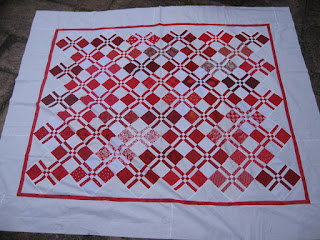 As long as I’m being efficient and getting all my accumulated blocks made up into tops, etc, here’s something I finished today – the top with the red and white blocks I won from March’s lotto. This is probably a record for me in terms of the short length of time it took me from receiving the last set of blocks to assembling them into a top… Of course, it will be quite a while before the top is quilted, because it’s quite big, so will need to go to the longarmer, and as I am not made of money (darn) I only send one every few months – there are a couple on the list before this one gets a turn…
After playing around with the blocks literally and in my head for a while, I decided to listen to them – they’d been telling me they wanted to be set on point. Since I happened to have quite a good amount of white fabric in my stash, I went ahead and did it. Annoyingly, the blocks were right – they DID obviously want to be set on point. I have to say, I love the mix of reds – they look great together, and look even better when there’s a little more light – I forgot to take a photo of this before dinner when it was still sunny, so this was taken about 9pm, when the light was starting to go. It’s going to (eventually) be a nice quilt, though as it won’t match anything in my house, I’ve no idea what I’m going to do with it!
Social media & sharing icons powered by UltimatelySocial