Posted by Automagically imported from Blogspot on July 17, 2011 in blocks | 1 comment

I finally got my current quilting project to a state where I can think about working on something else.  So, after I tidied up a bit, I pulled out some bright fabrics and made a few more checkerboard blocks.  The yellow set was already registered, so a total of 5 from me. 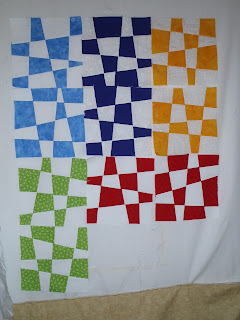 One oops – the red is actually red with stars, which are outlined in black.  I think it still reads red, but if it isn’t acceptable according to the guidelines, then I’ll toss it in as a bonus block to whoever gets mine, and you can count 4 pairs from me.