Posted by Automagically imported from Blogspot on November 16, 2010 in Uncategorized | Comments Off on 2 simple entries 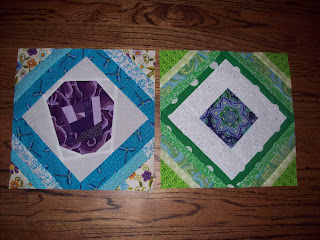 Here are 2 entries for the month. The first is a replay of the liberated rose from several moths ago. The second is a very simple block (hope it qualifies) that features a beautiful purple flower fabric, letting the fabric speak for itself (sort of a Kaffee Fassett influence).

On a different topic, I think I have finally broken through to completion on a large quilt project that has taken most of this year. It is a block of the month, originally intended as a queen, and I had finished the top in the spring. But then I decided to give it to my sister-in-law, and they have a queen, so then I needed to use some of the backing fabric to make extra borders, so that forced some sort of pieced back. I had bought a yard of each of the fabrics in the top as an abundance of caution, so I decided to make a French braid, using the foundation print as the center. I show both the back and the top on my blog, LindaBigD.blogspot.com. I hope to get it to a long armer this weekend but I’m doubtful it can be turned around for Christmas. I’d welcome visitors and comments.