Posted by Automagically imported from Blogspot on December 18, 2011 in Uncategorized | 3 comments

Here’s the results of our poll. What’s your December quilting project? 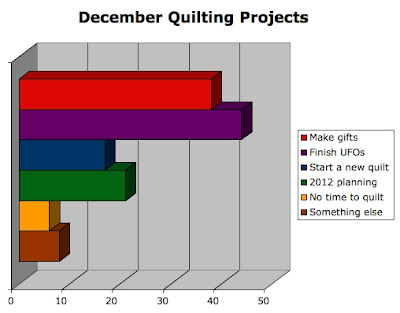 Personally, I realized that  I’ve done a little bit of “all of the above” … and not as much as Block Lotto blog projects as expected–since most of you consistently remind me, if it ain’t broke, I don’t need to fix it, I’m not feeling too bad about my lack of productivity … but I DO need to get busy and make some January sample blocks, so that after the holidays, I’ll be ready for Block Lotto 2012.