Home » show and tell » Violets for my Purple ‘Nina

Violets for my Purple ‘Nina

If you have been around a while, you probably remember the Violet blocks we made in August, 2011.  You might remember that I was using Google Docs around that time, too, as a place to store Block Patterns.  The Violet block was a popular one, both for the lotto and for lots of other quilters, especially after the block and projects made from it started popping up on Pinterest.   Because the pattern was updated, I removed the old sneak-peek version from Google, which led to me frequently (still!) receiving (automated from google) email requests to share the no longer on google docs pattern.

I always wanted to make something using that block and, last month, when purple was the color-of-the-month for the Rainbow Scraps Challenge, I decided that those violets would make a perfect sewing machine cover for my purple Bernina.

I have never been one to name my sewing machines, but somehow, some time, this machine became Purple ‘Nina and the name stuck. (My Singer 301, for some reason is masculine,  and now known as Isaac).  I’ve been on a kick, lately, of hand embroidering words and phrases, so when I thought about what to add to the space above the blocks, adding her name seemed an obvious choice. 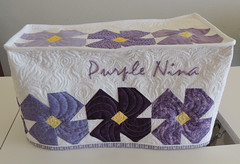 The cover is made from 5 inch blocks, a size which wasn’t included as one of the 6 sizes in the original block pattern, but worked well for the measurements of my machine.  I made 11 blocks: 3 each for the front, back and top and one on each end.

There are more photos and details of how it is made on my Sophie Junction blog post today (which also includes some progress on my mod-mod throw-size quilt).

I don’t know why I kept the bonus triangles, sewn from the bits you cut off when you add the snowball corners when making this block.  They were tiny, with a size that would finish at 1/2 inch.  But I did tuck them away and … even used them. 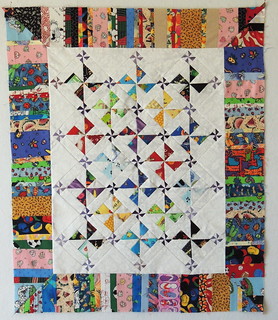 They turned out to be a perfect addition to a quilt made from some other bonus triangles (from an I-spy charity quilt).  I sewed them into 1 inch pinwheels and used them as the corner-stones in the setting.

I found the border strips in my bin of I-spy fabrics.  When I was cutting fabrics to swap, I had sewn the leftover strips into 4 1/2 inch wide strips–there were four of them, just long enough for the borders.

This little quill is 27 x 43 inches. Aside from the sashing and setting triangles (and about 10 more of those tiny purple pinwheels I made so I could add them around the outside), it was made from the stuff I know that many quilters toss.

This morning, I couldn’t resist putting the three related projects together: A Star quilt for the Northern New Mexico Quilt Guild’s charity effort, made with I-spy fabrics as background (source of the big pinwheels), my violet block sewing machine cover, and the little pinwheel quilt which is waiting it’s turn to be quilted. 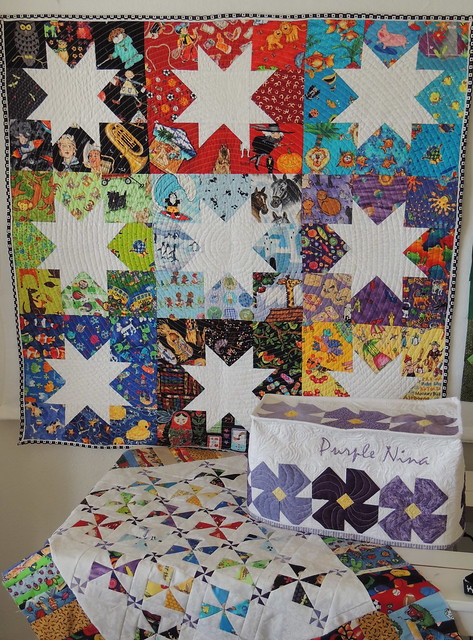