Posted by Automagically imported from Blogspot on October 6, 2009 in blocks | Comments Off on October Block details 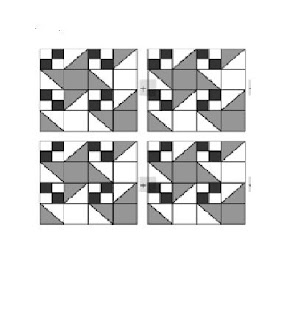 Sophie is still under cover (literally!), trying to shake off the flu bug. So, for those of you who didn’t get the October Sneak Peek — here is the information for this month’s block. Note that it finishes at 8″ instead of 6″…
Since I only have the instructions in pdf format, and I don’t know how to attach a pdf file to the blog, you’ll need to refer to the picture above, and the picture that Sophie posted a few days ago, and leave a comment if you need help figuring out the instructions!

The October Lotto block will be Milky Way, one of those “blocks” whose pattern is only
revealed when it is set in a straight set, side by side with no sashings. It appears to be
composed of interlaced friendship stars—which we will make in yellows and blues, with
four-patches filling in the gaps. Here’s how 4 blocks look:
According to Barbara Brackman in the Encyclopedia of Pieced Blocks, directions for this
block are credited to the Ladies Art Company, a publication that was active from 1895 to
1934. One UNUSUAL aspect of this month’s block – it measures eight INCHES (finished size)

Blue and Yellow Half-Square Triangle (HST) Units:
1. Cut 4 blue and 4 yellow 2-7/8 inch squares
2. In pairs, place them right sides together and draw a
line diagonally through the center
3. Sew 1/4 inch on each side of the drawn line
4. Cut on the drawn line and open the HST unit
5. Press seam toward dark side. Repeat for each pair for
eight HST units
Each HST unit should measure 2-1/2 inches (including
seam allowances)
Blue and Yellow Squares:
Cut 2 blue and 2 yellow 2-1/2 inch squares
Assembling the Block
Lay out the units like this–if you are a little dyslexic like me, you might want to check the
orientation of 4-patches and the angles of those HST units a second time before you
begin to sew . . .
Sew them together, row-wise, as illustrated (or, if you prefer, as four 4-patches . . .
whatever works best for you 😉
I think this block could become a nice, easy last minute holiday gift for the winner to
throw together, so I actually moved it up from November, when I originally planned it, to
October. I also think this one could be a great one for a virtual quilt, so if anyone is
inclined to make blocks EARLY and send me PHOTOS, I would LOVE THAT.
THANKS in ADVANCE,
Sophie
Social media & sharing icons powered by UltimatelySocial