Posted by Automagically imported from Blogspot on October 27, 2011 in blocks | Comments Off on Broken dishes & catch-up

I am so far behind on Block Lotto.  How far behind?

Well, I would like to thank Andi in AZ, Belinda in TX, Cathi in Clare, Deana in UT, Jennifer in CA, & Shelley in ME for your August lotto blocks.  Yes August.  They all arrived ages ago but my kitchen was in boxes & then came out of boxes & then when two of the three new appliances FAILED & had to be replaced, a lot of things had to go back into boxes…well, it was a shambles.  I am sorry to take so long; your envelopes were among the things that had to be boxed so the repairman had room to…perform (work seems the wrong word somehow since he never fixed anything & actually broke other things while he was here).  All the violets are so wonderful & I cannot say thank you thank you thank you enough.

In other late, but not so late news my rails were mailed.  They were mailed so long ago they have probably been received.  Reading Block Lotto is a luxury & I have not had much time for that lately.  My choice yesterday was read Block Lotto or make the current block(s). 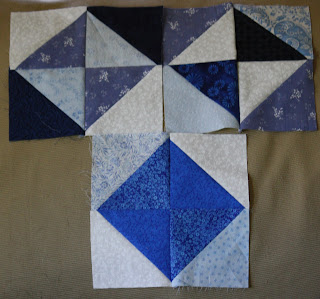 & so finally all caught up & here they are:  my October 2011 sampler blocks.  They are variations on the traditional block “broken dishes”.  It seemed appropriate somehow.  Also I just love this block & used this same color scheme to make a broken dishes quilt for my step-father years (OMG it has been years!) ago.

These three are all to donate; I am still making offerings to the Block lotto Gods for my two wins this year.