Why Red and Santa Fe’s Summer of Color

Posted by Sophie on August 1, 2015 in block lotto community | 1 comment

The short answer is because:

The Summer of Color is the theme for many of the museums and galleries in Santa Fe right now.  Here’s a glimpse of two of the shows that feature red that I have enjoyed this summer.

At the International Museum of Folk Art, there is a really interesting exhibit that follows the history of cochineal red:  The Red that Colored the World.

Unfortunately, there was no photography allowed in this well-curated exhibit that traced that path of cochineal red first used in Latin America and discovered by Spanish Explorers and brought back to Europe.  Cochineal is an insect (and a color) that produced a rusher, longer lasting red that previously existed and became a precious export–second only to silver–from colonial Spain.  During that period of history when Spain and England weren’t friendly, Spanish ships filled with cochineal were often the targets of English pirates.  And in England, where the famous redcoats of the military had traditional been colored by madder dyes, cochineal was now used to dye the wool for officer’s uniforms.

If you are curious, you can read about the history of cochineal dyes here.

In the gallery at the Roundhouse (the state of New Mexico’s capitol), there is a SAQA exhibit of art quilts with the theme, Cultural Red. I thought this quilt, Romancing Red by Michelle Jackson, was a great red inspiration. 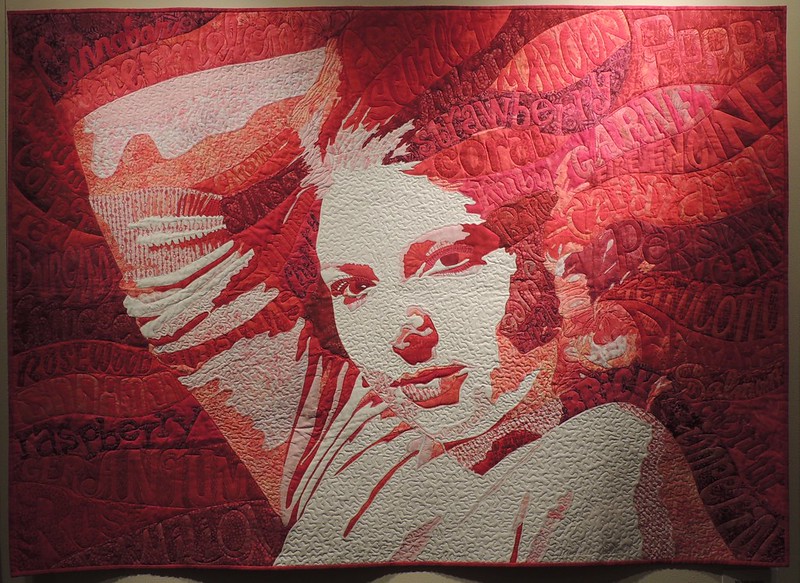 If you look closely at the woman’s hair and the background, you’ll see 40 different color names for shades of red. You can read what Michelle had to say about her quilt here: Romancing Red.  If you’re more of a blue person, also check out her quilt Oh So Blue. Both are fantastic in person.

I have taken some detail photos of the red words; you can see them in my Flickr photo album Cultural Red. The incandescent lighting in the gallery was a little challenging (it turned a lot of things yellow/orange).  I haven’t yet uploaded the rest of my photos from the show (but hope to do so, soon) … there were many interesting interpretations of “cultural red.”