Posted by Automagically imported from Blogspot on October 2, 2011 in blocks | 3 comments 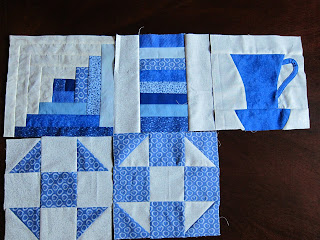 I’m a relatively new quilter and got started on the block lotto within about a year of starting to quilt, so I started making “liberated” blocks before I had ever made the traditional versions. So these blocks are the traditional versions of log cabin, Chinese coin, and shoofly. However the coffee cup is my liberated invention and experiment with some of the bias techniques and 2-layer cutting Sophie has presented us. The cup’s curves are similar to last month’s batiks, and the cup handle is based on the basket handles from the 2010 liberated baskets. I will have the reverse image of the cup to post later (white cup
blue background), but I have other chores tonight. I love these colors.
The hardest thing for me was to figure out sizes for 8.5 in. block, as it is not easily divisible by 3, and many patterns work around 3 rows. 😉